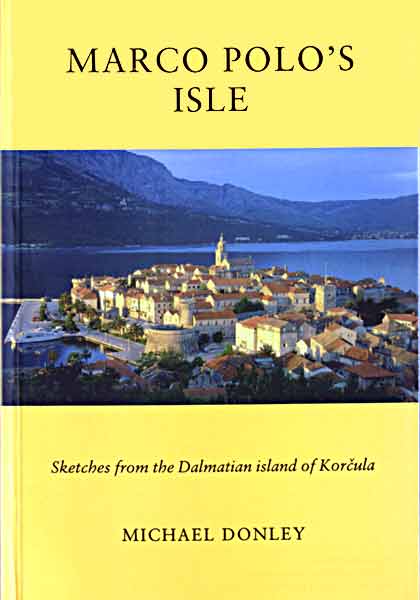 Sketches from the Dalmatian Island of Korcula

The Croatian Adriatic – the New Riviera. Surprisingly, this nickname is a good hundred years old; yet once again the area has become a popular destination. However, apart from guides and books of a political or academic nature, nothing has appeared in English for 25 years. Marco Polo’s Isle is thus a timely publication. In it the author offers an in-depth view of one particular island, but at the same time captures the spirit of Dalmatia as a whole.
In 1298 a naval battle between Venice and Genoa took place off Lumbarda, at the south-eastern tip of Korcula. Marco Polo was one of those taken captive by the victorious Genoese. It was while imprisoned in Genoa that he dictated to a fellow prisoner – who happened to be a writer – the account of his journeys to China. Thus it was that the world’s most famous travel book came to be written.

Although Marco was fighting on the side of the Venetians, Korcula claims – with a fair amount of evidence – that it, not Venice, was his birth-place. Using this theme as a connecting thread, the author brings to life from the inside the people, traditions, language, history, music and festivals of Marco Polo’s Isle, one of the most beautiful in Dalmatia.

Anyone who has visited this lovely island will want a copy of Marco Polos Isle on their bookshelf. It is not just a once-off read but a beautifully written treasure trove of information in which to dip again and again. Those who have not yet visited Korcula will be booking their passage well before the last chapter.

Few arrivals can be as memorable as the approach to the town of Korcula on the Dalmatian island of the same name. Especially if you are sailing down from Split on a clear day in spring or autumn, the air hot but haze-free, aboard one of those grand vessels of the Jadrolinija line that ply the full length of the Croatian Adriatic from Rijeka to Dubrovnik. Aboard, preferably, the grandest of all – the Marko Polo, named after the medieval traveller whom local tradition claims as hailing from the very town that is almost in sight.

Icing-sugar white, and perhaps shadowed by dolphins, the ship slices effortlessly through the still cobalt waters, confidently on time. Eventually the tip of the Pelješac peninsula slides into view on your left, low-lying at first then gradually gaining height, as if gingerly pushed into place like a change of scenery in a child’s Victorian box theatre. You could reach out and touch it; its nearness seems impossible.

To the right, the island of Korcula – long visible – comes up closer, squeezing you into what early Venetian travellers described as “the most beautiful channel”.
To Andrew Archibald Paton, who passed this way 150 years ago, the channel seemed “a sort of Bosphorus on a grander scale”.

Korcula – the Curzola of the Italians – the Kerkyra Melaina of the ancient Greeks. Black, Dark Kerkyra. So called, say some historians, to distinguish it from that other Kerkyra – Corfu, as we now call it. Certainly, the greyhound-grey hills of Pelješac on the left contrast sharply with these abundant forests, the raw material for a tradition of ship-building that extended over millenia, dying out within living memory. But a true appreciation of their density is not to be had from a ship’s rail. Nothing beats those aerial photos in which you can see – most obviously on the archipelago of rounded islets – that the vegetation really does cover most of the surface (over 60%, in fact) like a deep pile carpet, coming down to the water’s edge. A narrow cream fringe of crinkly limestone lacework – where the underlying karst has been licked bare – intensifies the blue of the Adriatic, simultaneously deepening the green until it is green no more. Seen from above, the impenetrable tuftiness of their swarthy humped backs makes them seem like marine hedgehogs. Dark Kerkyra: it seems an unprepossessing nickname at first and Paton’s alternative – “the Emerald Isle of the Adriatic” – may seem initially more tempting. Yet, viewed from the mainland or perhaps from a local fishing boat as the sun starts to set, the forests turn a smudgy blackish brown and you begin to see what the ancient Greeks had in mind.

The channel narrows further, to a mere kilometre or so, and you are soon passing the small 15th century Dominican monastery that teeters on the water’s edge, its mandrac – its tiny, private harbour – looking no bigger than a bathtub. On the left, the peninsula seems closer still as the hills rise 3,000 feet to the grandeur of Mount Sveti Ilija. There is no danger, however, even for such a large vessel as this. For all along this Dalmatian coast – surely among the most attractive in Europe – the fjord-like depth of the waters parallels the height of the Dinaric Alps as they plunge headlong into the Adriatic.

If the General Manager of Jadrolinija is here in his holiday home, the captain will steer his leviathan over to the right, hooting in true Balkan fashion until the boss or his wife step out onto their balcony to give a wave. Greetings over, the ship will immediately have to regain the middle of the channel, for the old town sticks out into it. Biscuit brown in the sun, it is a medieval Venetian architectural miniature whose appearance belies its troubled history, looking – from a distance, at least – as fresh as if the masons had just packed away their tools. A smaller Dubrovnik, say some. But, unlike those of Dubrovnik, these roof tiles were not subject to shelling during the war of independence from Yugoslavia, as is testified by the greater preponderance of mottled ancient hues. And at Dubrovnik you can’t arrive like this on one of the large liners, hugging the walls as you circle the Lilliputian townlet, gaining a bird’s-eye view and a close-up all in one. There you must dock at the modern port of Gruž and then travel by bus or taxi. Here the magic is in the very approach.